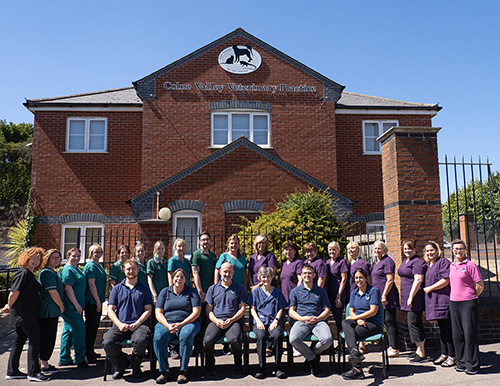 Everyone at our practice is committed to providing you with the very best in pet healthcare. Our veterinary team brings a wealth of experience to the practice, and each member has individually obtained high standards of professional qualification.

Your first point of contact will invariably be with our reception team who answer the telephones and keep front-of-house running smoothly. Between them, they have more than one hundred years of service with Colne Valley Vets.

We also have a capable team of cleaners working on all areas at the main and branch surgeries.

John MacBrayne
Veterinary Surgeon
BVMS, MRCVS
After qualifying from Glasgow Vet School in 1992, John spent two years at a vet practice in Reading and then a few months working abroad before moving to Colchester in 1996. He initially intended to stay for five years or so, but found Colne Valley Vets to be such an enjoyable and fulfilling place to work that he did not want to leave. John became a partner with the practice in 2000 and continues to enjoy his work very much, helping the practice grow and develop. He spends much of his spare time looking after his three boys with their many sporting activities. John's family has a lurcher called Percy and a labradoodle called Rolo.

Alison Logan
Veterinary Surgeon
MA, VetMB, MRCVS
Born and educated in Colchester, Alison joined a small animal practice back in her home town after qualifying from the University of Cambridge in 1989, and has been with Colne Valley Vets since 1991. She enjoys consulting and has a special interest in internal medicine. Alison has also written for various publications and a series of dog breed books, and was involved in writing books on dog care and cat care which included photoshoots here. Black Labrador Smudge and Wellie the black cat were joined by mischievous Molly, a fox-red Labrador, in December 2019. Sadly, Smudge was put to sleep on his thirteenth birthday in March 2021 but lives on through his photograph on the front of our care plan leaflets. 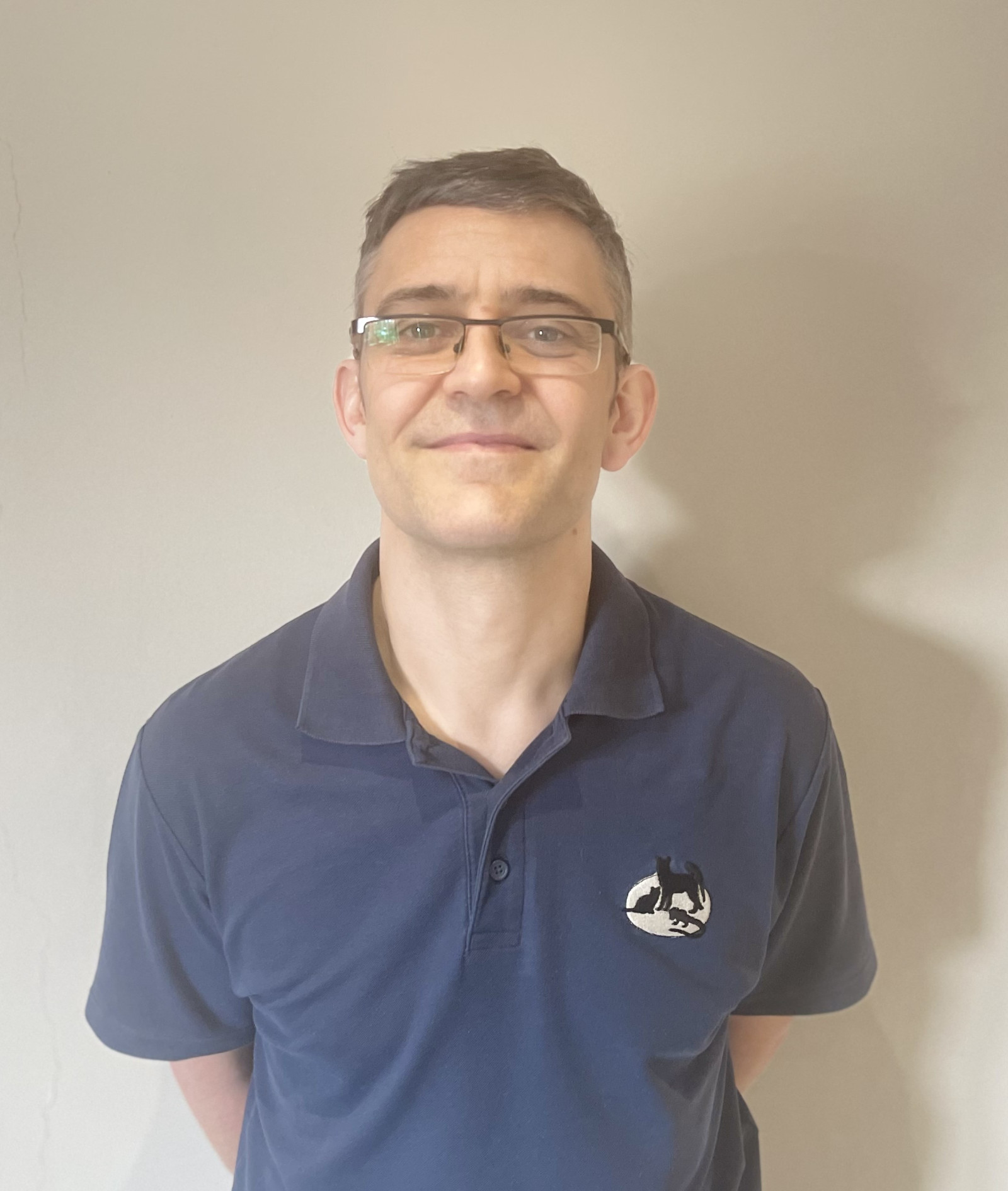 Neal O'Connor
Veterinary Surgeon
BVSc MRCVS
Neal qualified from Bristol University in 2000 and worked in mixed practice for two years before concentrating on small animals. He has worked in various veterinary practices in Essex and Suffolk, as well as running an emergency and critical care centre in Perth, Western Australia from 2012-2014. Neal’s main interests are internal medicine, soft tissue surgery and clinical pathology. In his spare time, he enjoys playing football, keeping fit and spending time with his two sons.

Fiona Clements
Veterinary Surgeon
BSc(Hons), BVSc, MRCVS
Fiona trained in Australia, graduating from the University of Queensland in 2003. After completing an internship in Brisbane, Fiona moved to the UK in 2006, and has worked in small animal practice since then. Fiona enjoys all aspect of her career, and has a particular interest in feline medicine. She joined the team at Colne Valley Vets in March 2020. At home, she has two rescue dogs, a naughty chihuahua, and a growing family of cats. Fiona enjoys travelling and reading whenever she has the chance.

Maria Samalea
Veterinary Surgeon
MRCVS
Maria qualified in Spain in 2000, and spent more than ten years working in large animal practice. In 2015, she moved to the UK and started her small animal journey. Maria’s special interests are surgery, dermatology and nutrition. She has two children and her hobbies are dancing, yoga and cycling.

Tom Southgate
Veterinary Surgeon
BVetMed, MRCVS
Born and raised in Colchester, Tom trained at the Royal Veterinary College in London. During his training, Tom came to Colne Valley Vets for work experience for several years before graduating in 2018. The experience did not put him off, because Tom came to join the team in 2021 and hopes to pursue interests in medicine, diagnostic imaging and cardiology. Tom lives with his lovable (but naughty) rescue cat Teddy, and in his own time unwinds by training for tug-of-war with Colchester Young Farmers, and painting. 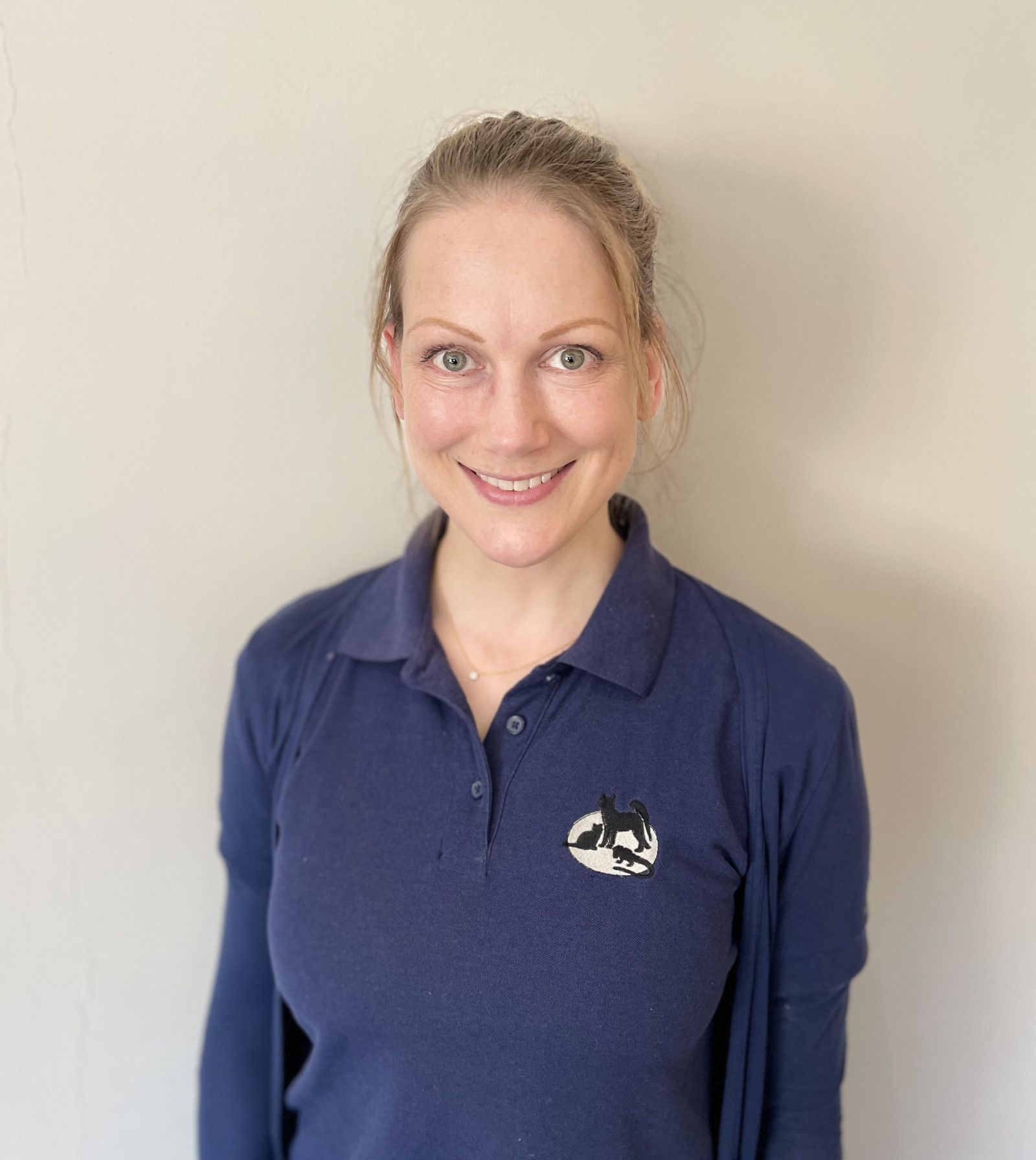 Alexa Chatterton
Veterinary Surgeon
BSc (Hons) BVSc (Hons) MRCVS
Alexa graduated from Bristol University in 2007, having achieved a degree in Animal Behaviour and Welfare as well as Veterinary Medicine. She has a keen interest in veterinary dentistry, and enjoys being able to diagnose and fix dental problems which are often chronic and have such a dentrimental yet hidden effect on animals' quality of life. Alexa is also a qualified acupuncturist, which she finds is especially beneficial to help manage arthritis pain. When not working at Colne Valley, she enjoys cycling, baking, running and paddleboarding, most of which her rescue Labrador Roscoe will join in with, given half a chance! 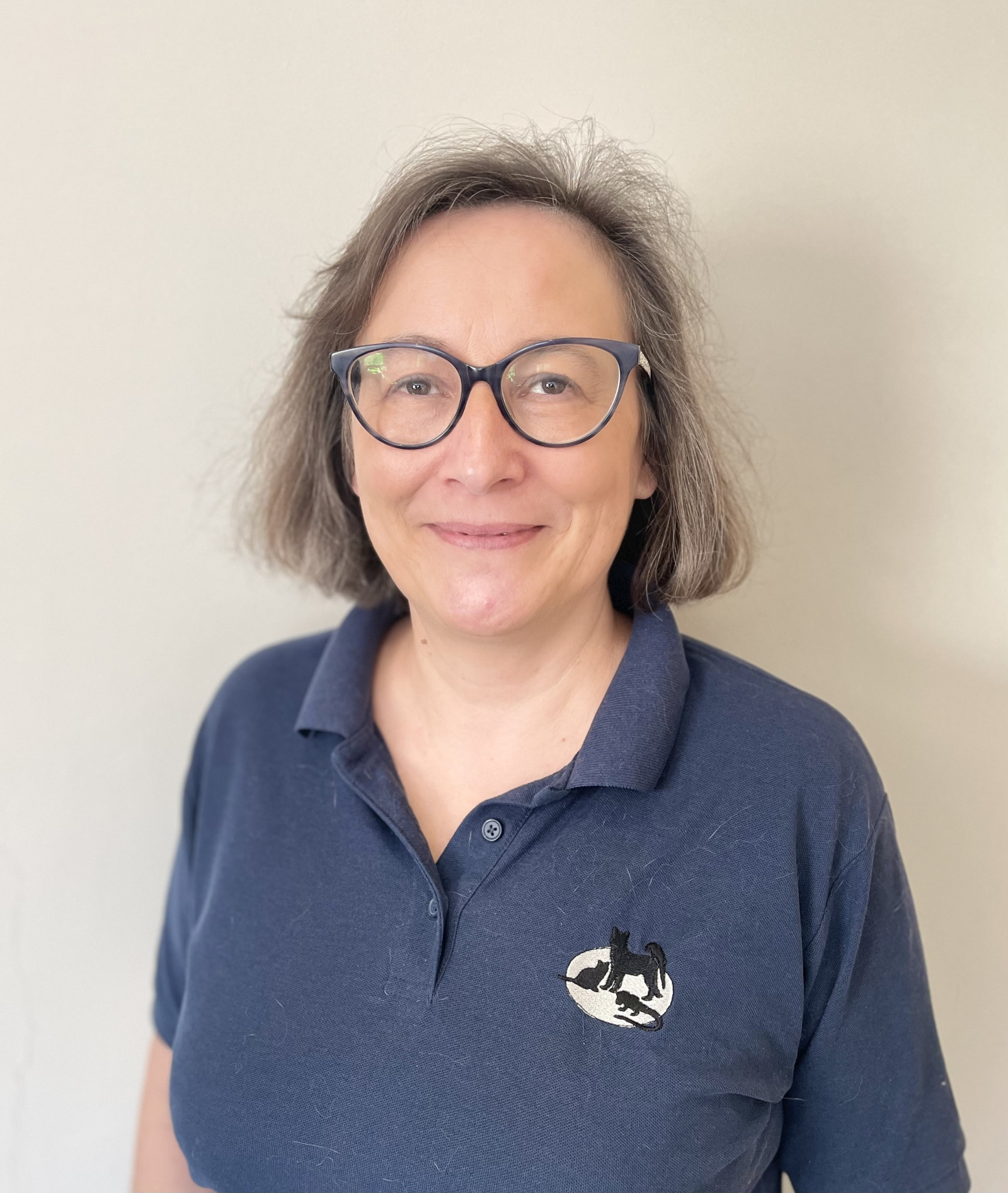 Pascale Collins
Veterinary Surgeon
DVM, CertVR, MRCVS
Pascale qualified from the University of Liege, Belgium in 1991 and came to England soon after. She developed an interest in radiology leading her to study for and gain the RCVS Certificate in Veterinary Radiology. She has worked mainly in Essex and enjoys all aspects of small animal medicine. Pascale has three mischievous cats who keep all the family entertained. In her spare time, she enjoys walking and playing the cello.

Nish Bird
Veterinary Surgeon
MA, VetMB, MRCVS
Nish graduated from the University of Cambridge in 2006. She worked in mixed practice for several years before returning home in 2012 to Colchester to concentrate on small animal practice. Nish joined Colne Valley Vets in January 2022. She enjoys all aspects of general practice particularly surgery, and likes developing a bond with her clients and supporting their pets through their various life stages. Outside of work, Nish is married and a mum to two children. Sully the black Labrador and Lola the geriatric cat complete her family.

Hannah Watts
Veterinary Surgeon
BVetMed, MRCVS
Hannah qualified from the Royal Veterinary College, London in 2008. She joined us in 2013 to consult on some Saturdays, and now on alternate Saturdays, but has known Colne Valley Vets since 2003 when she was a Saturday student and subsequently seeing practice with us during her training. Her interests are internal medicine in general, dermatology specifically. Hannah has worked in the veterinary pharmaceutical industry since 2010. She has three horses and two Patterdale terriers called Ted and Bruce.

Jeremy Holland-Howes
Veterinary Surgeon
BVetMed, MRCVS
Jeremy qualified from the Royal Veterinary College, London in 1990 and has been consulting at Colne Valley Vets on alternate Saturdays since 2000, more recently on one Saturday in four.

Lorna Nuttall
Veterinary Nurse
RVN, MBVNA, C-SQP
Lorna is the practice's Head Nurse and Suitably Qualified Person (SQP). After qualifying in 1991, Lorna worked in various mixed and small animal practices before joining Colne Valley Vets in 1994, with two brief periods of maternity leave since then. Her particular interest is managing the pharmacy, but she still really enjoys hands-on work with patients. Lorna has also completed a veterinary practice management certificate, and has been a Pets As Therapy (PAT) assessor since 2001. She has two dogs - a golden doodle called Inka and Gilbert a cockerpoo - and a cat called Buttons.

Xanthe Ashby
Veterinary Nurse
RVN, MBVNA, C&GCert.Exotic
Xanthe has been working at Colne Valley Vets since 2002. Her special interests are nursing exotic animals, and the care of geriatric cats and dogs. When not working, she likes to travel as much as possible.

Antony Ashford
Practice Manager
RVN, MBVNA, CertSAN, PHC
Antony joined Colne Valley Vets in 2005 as a veterinary nurse. His areas of responsibility are the smooth running of the practice, and managing the practice nurse clinics. Antony has five cats: tabbies Marley and Tiggy, and the Burmese youngsters Kirby, Kooper and Kasper. In his spare time, he sings with a group called The Skittlez.

Rhiannon Haygreen
Veterinary Nurse
RVN, MBVNA
Rhiannon has worked here since 2007. She has a keen interest in dentistry.

Sian Plume
Veterinary Nurse
RVN, MBVNA
Sian qualified in 2014 after spending three years training in a veterinary hospital in Suffolk. She has a particular interest in emergency and critical care cases. Sian has a cat called Florence, and a Labrador called Jaffa. 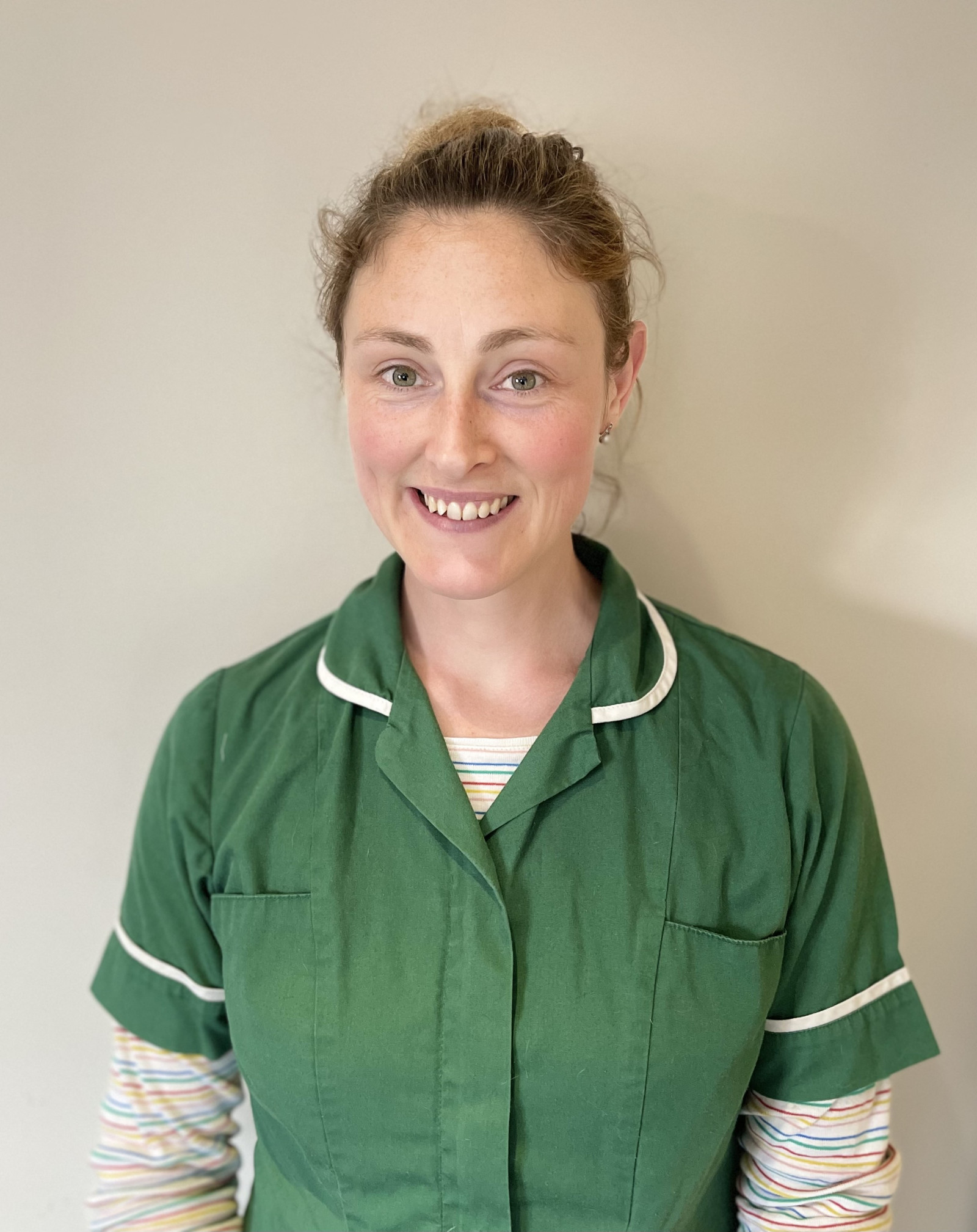 Emily Dutton
Veterinary Nurse
BSc(Hons), RVN, MBVNA
Emily worked with us as a locum over three years, interspersed with travel, before realising that she wanted to settle here and became one of our full-time veterinary nurses. Emily lives on a farm with livestock which include water buffalo! Her special interests are exotics and farm animals. Emily has three cats and two dogs. Emily is currently on maternity leave.

Abbie Heathcote
Veterinary Nurse
RVN, MBVNA
Abbie qualified in 2016, and provided locum cover here for a year before joining on a permanent basis in 2020. She enjoys caring for the in-patients, and takes a special interest in wound management. In September 2019, Abbie rescued Peggy, a three-legged cat, and more recently became the owner of a black Labrador Twiggy. 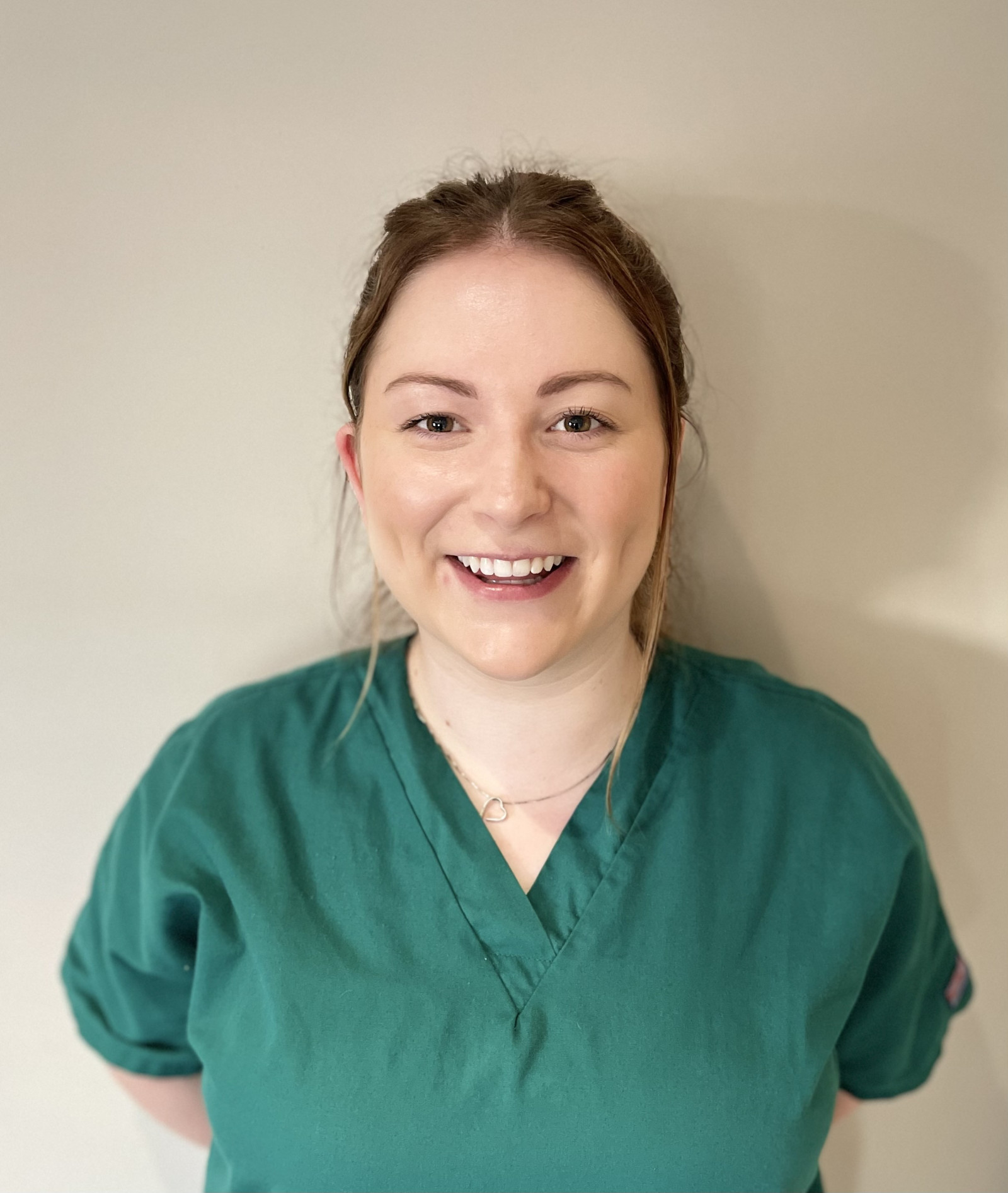 Holly Ralph
Veterinary Nurse
RVN, MBVNA, SQP
Holly studied towards becoming a Registered Veterinary Nurse after completing her SQP, and qualified in December 2020. Holly has worked with animals since she was fourteen years old and enjoys caring for in-patients. She is interested in small furries, and gaining experience with exotics and emergency care.

Andrea Hazeltine
Veterinary Nurse
RVN, MBVNA
Andrea joined Colne Valley Vets in 2000 to train as a vet nurse and, following qualification, worked here full-time until she had her children. Andrea now works on a part-time basis. She has two dogs and Maxi the cat. 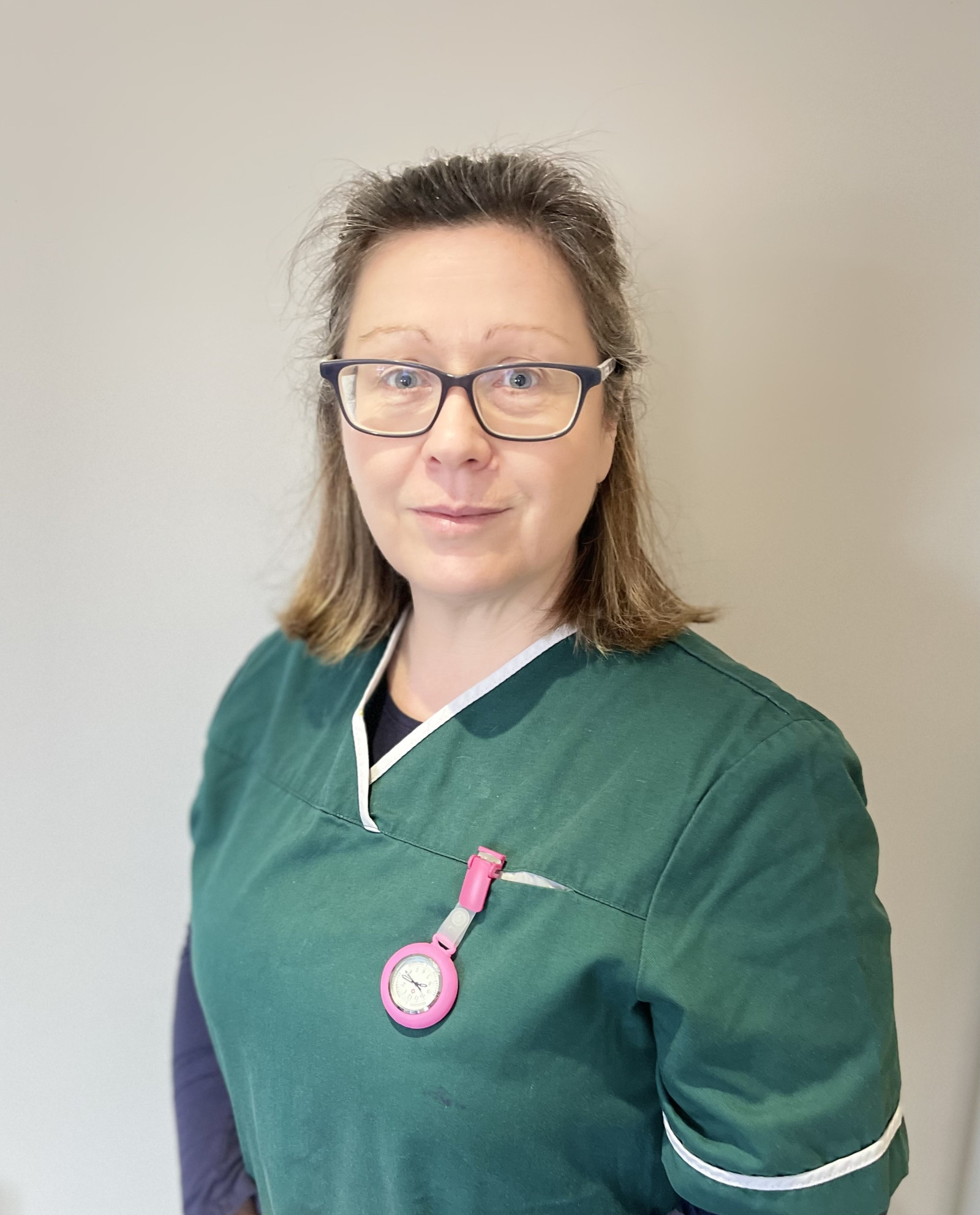 Esther Riley
Veterinary Nurse
RVN, MBVNA
After qualifying in 2000, Esther worked in a mixed practice, a London RSPCA clinic and Southfields before joining Colne Valley Vets in 2006. Her special interest is pain control. Away from work, she is busy with family life as mother to two children.

Lucy Doyle
Veterinary Nurse
BSc (Hons), RVN, MBVNA
Lucy started training to be a veterinary nurse at Colne Valley Vets in 2009, qualifying in 2012. Her special interests are pain management and feline care. She has a horse and two cats.

Tina Kemp
Veterinary Nurse
RVN, MBVNA
Tina qualified in 2001 and has worked in a variety of veterinary practices in the UK and abroad since then, specialising in exotic species and reptiles. She has worked on a locum basis at Colne Valley Vets several times and has now become a permanent member of staff. Outside of work, she enjoys a variety of sports, walking her dogs and rehabilitating hedgehogs. 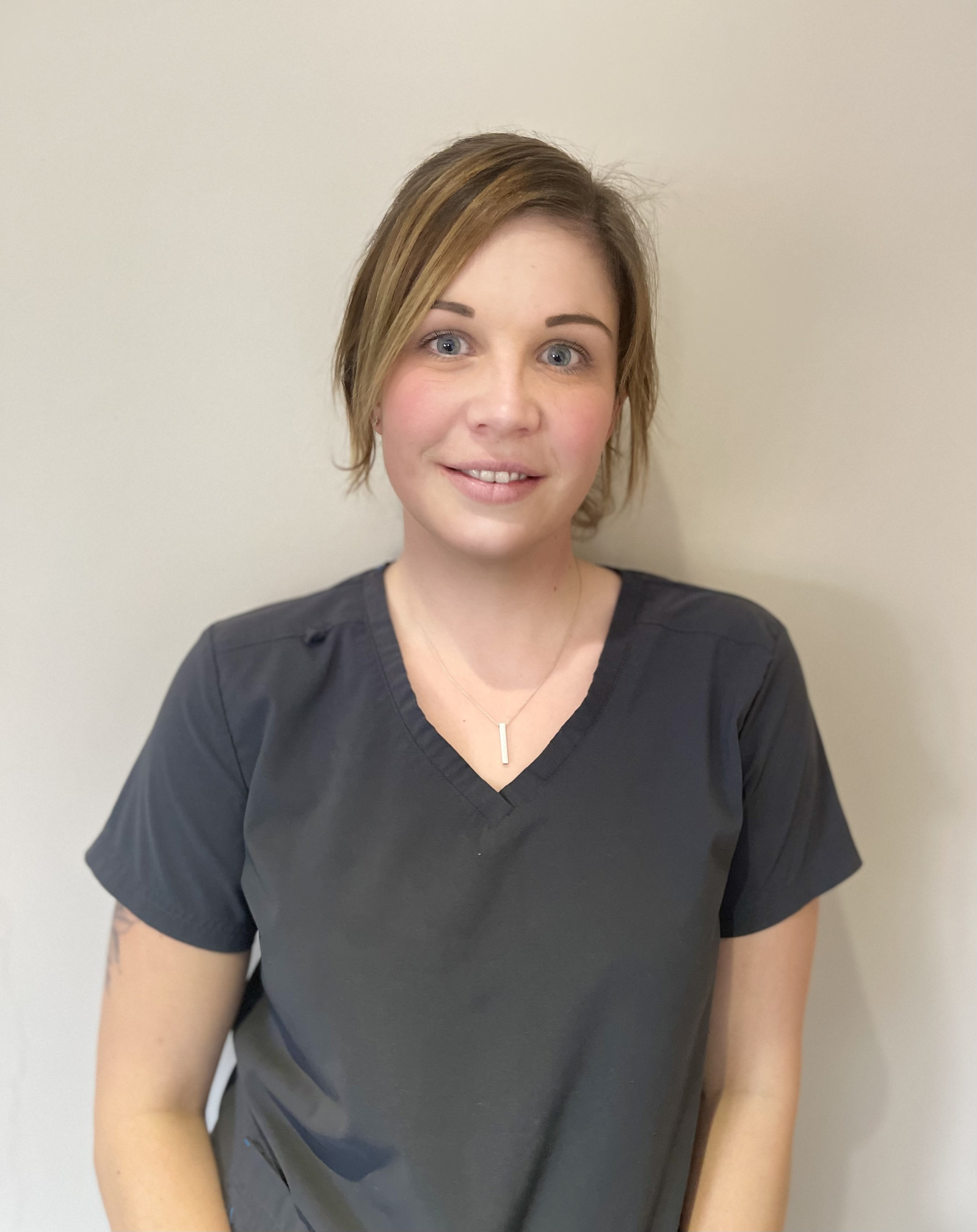 Darcy Ruddock
Veterinary Nursing Assistant
Darcy initially joined the practice as our Saturday kennel assistant. She is now sharing the role of veterinary nursing assistant with Emma and Yasmin. Darcy has one dog and three cats, and in her spare time enjoys needlework. 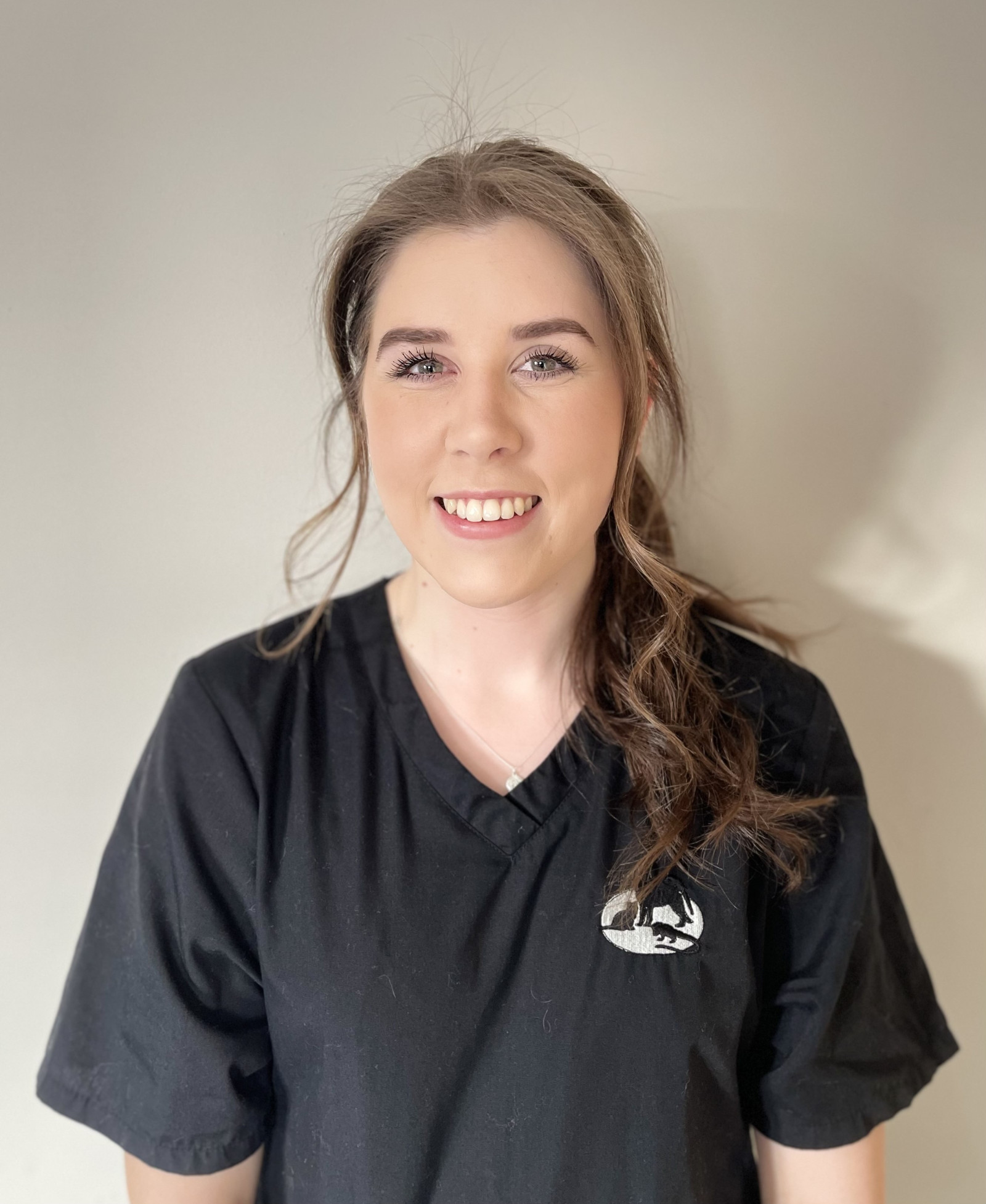